After setting two of the highest scores of the competition in the first two matches — 88 and 98 — teams started playing heavy defense on us; we were pinned by two robots for an entire match.  Despite this, we still won six out of nine matches in the qualification rounds.  Some matches were very close; we lost one match due to a two-point difference.

We were picked by fifth seed Team 599 and then picked Team 1662.  Our alliance won the first quarterfinal double-elimination match 92 to 78, but just like at the Silicon Valley Regional, we unfortunately lost the next two.

Still, we walked away from the Sacramento Regional with another award for our unique camera tracking system, the Rockwell Automation Innovation in Control Award.

Our next competition is the FIRST Championship Event in Atlanta, Georgia, where teams from all over the world will come to compete.  Wish us luck! 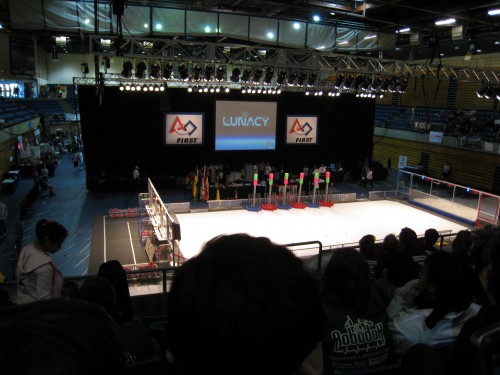 The field at the 2009 Sacramento Regional