Our team’s most successful season in our history so far came to a conclusion today at the 2010 FIRST World Championship Event.

We were placed in the Archimedes division, arguably the toughest and most stacked of the four divisions at the Championship Event. Despite this, after ten qualification matches we were the only team in our division to go undefeated with 8 wins and 2 ties, ranking us 6th out of 87 teams — the highest our team has ever seeded at the Championship Event. After choosing the team we won the Sacramento Regional with — rookie Team 3256 the WarriorBorgs — and the 2010 Championship Chairman’s Award Winner — Team 341 Miss Daisy — to join our alliance, we went on to compete in the elimination matches.

Despite this abrupt end to our season, our team is extremely proud of what we’ve accomplished during the 2009-2010 season, totaling ten awards since the 2009 CalGames, including the FIRST Triple crown at a single regional — Regional Chairman’s, Regional Champion, and Woodie Flowers — as well as triple qualifying for the FIRST Championship Event. We are also really glad to have made many new friends within the FIRST community, especially Team 3256, with whom we hope to continue our relationship for long time. We hope that many of the lessons we’ve learned, friendships we’ve made, and accomplishments we’ve achieved will continue to help better Team 604, and in turn help us better reach out into our community. 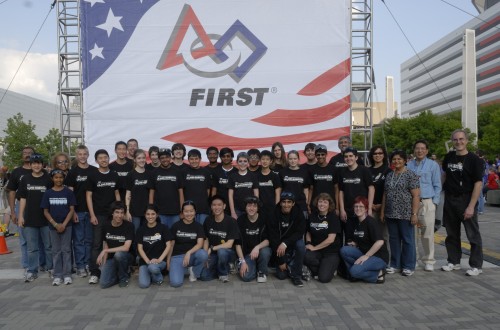 Team 604 with our mentors and parents!