With the 2011-2012 season just starting, FIRST Team 604 has already been hard at work, competing at two different off-season competitions — the WRRF CalGames and the MadTown Throwdown — running workshops, and demonstrating our robot throughout the community.

Working with NASA and FIRST Team 846, we showed off our 2010 FRC robot OverKill and introduced kids to robotics by letting them drive VEX robots at the 2011 San Francisco Fleet Week. You can find pictures from that demo and a few more this year on our website here.

For our off-season competitions, we chose to redesign our entire arm and minibot deployment. At CalGames, after some hard fought matches, we were chosen to be on the 6th seed alliance by FIRST Teams 1351 from Mitty HS, and 751 from Woodside Priory HS. Unfortunately, after losing the first quarterfinal against FIRST Teams 1868, 1678, and 256, our robot had communication issues with the field and was unable to move the entire next match, ending our CalGames tournament run. However we got some good news later on in the day when we found out we won the Entrepreneurship Award, as well as the first runner-up for the AMD CAD Award.

At the MadTown Throwdown, we were selected to be on the 6th alliance after winning 4 matches and losing 2 in the qualification rounds, joining FIRST Teams 3512, 1323B, and 3859. Unfortunately we lost in quarterfinals to the 3rd alliance, consisting of FIRST Teams 2073, 971B, 3256, and 362. It was a great learning experience for the team, and we look forward to going back next year!

Two Saturdays ago we hosted our annual FLL tournament, the Quixilver Qualifier. There were 16 teams in attendance with some action-packed rounds. We tried out a new system this year, having playoffs done with four alliances of two teams each, to try and mix up FLL and FRC. Looking at the feedback, it seems that all of the participants loved it! Congratulations to the champions, Team 1202,  VulnifiSquidz. Our team was later recognized with the Volunteer Award! A big thanks to Jim Mori for directing the tournament, all the volunteers, and FIRST Teams 2643 and 2135 for their help. 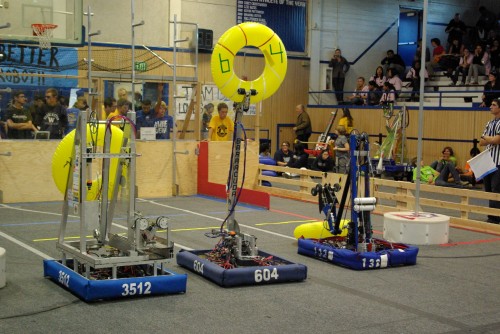 Our eliminations alliance at the Madtown Throwdown 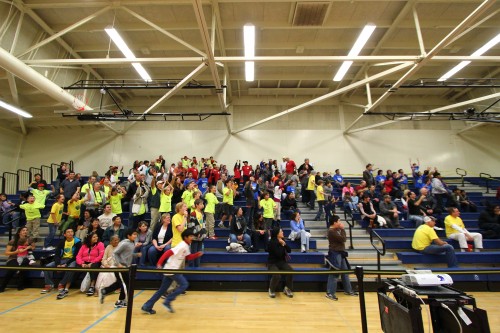 Shooting t-shirts at the Quixilver Qualifier