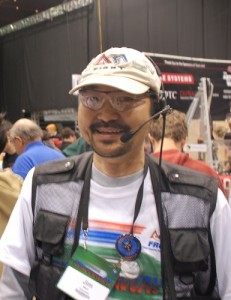 Mr. Mori was awarded his Woodie Flower’s Finalist Award at the 2012 Silicon Valley Regional (read more about it here). The following is his nomination essay:

Jim Mori can be spotted at FIRST events with his signature SF Giants hat covered with FIRST pins from as far back as 1999. He is known as the Godfather of FLL robotics in San Jose, as he started coaching FLL during the very first FLL challenge and has run many FLL tournaments. A dedicated mentor of FIRST Team 604, Mr. Mori believes in the FIRST mission, and truly inspires the students through his efforts.

In 1999, Mr. Mori launched the Los Alamitos Elementary Robotics FIRST FLL program, coaching his daughter’s team, culminating with a trip to LegoLand. His efforts launched the San Jose Unified Robotics Project, a district wide effort to put FLL teams in every elementary and middle school. He continuously mentors FLL teams and coaches. Since 2002, Mr. Mori has directed FLL tournaments from district-wide 64 team events to aiding in our Quixilver Qualifier at Leland HS. The NorCal tournaments still use the competition tables he built! Mr. Mori has new ideas on how to inspire kids. This year he initiated the idea of holding FRC alliance-style rounds for the FLL playoff matches, an idea that promoted coopertition and was quickly embraced by the students. All teams received custom awards, fabricated in Mr. Mori’s machine shop, for unique and exceptional qualities identified by the judges during the tournament.

When his daughter, Jennifer, graduated from the FLL program and was ready for FRC, Mr. Mori realized that her high school, Leland, did not have an FRC team. Working with Mrs. Arrington, he made a donation so the team could compete in Oregon. FIRST Team 604 was reborn. He has always opened up his machine shop for our use, and after countless late nights we always finish our robot. Mr. Mori never misses a teaching opportunity. From showing us how a water bottle can be used to protect motors, to welding, to CNC techniques, he takes advantage of every moment he has with the students. His daughter, Jennifer, will graduate college in mechanical engineering this year, and works for NASA at KSC. She describes “Dad’s rules”: work together as a team; explore your ideas; and, ask questions. Mr. Mori is not simply an exceptional FIRST Team 604 mentor. He has opened up his machine shop to, and has diligently mentored other teams including FIRST Teams 254, 668, 1967, 2135, 3256 & their coaches. He also serves on the Silicon Valley Regional Planning Committee and acts as SVR’s lead inspector. Last year, he designed, built, & delivered an award for Jim Beck at SVR as a thank you for his support of the teams.

Jim Mori embodies the spirit of FIRST. Through his 13 years with the program, Mr. Mori’s dedication to the mission of FIRST has never wavered, and he continues to inspire students to reach to their full potential.

Addendum: After running the Quixilver Qualifier this year, Mr. Mori started the inaugural annual Student vs. Mentor Basketball match, anticipating the theme of 2012’s game a full two months before it was released.